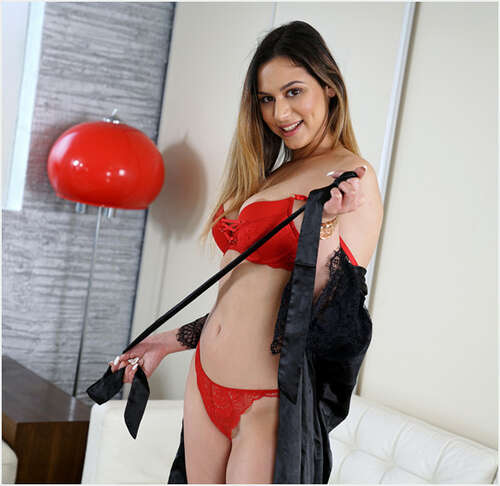 Watching porn and masturbating is one of Bella Rico’s favorite pastimes when she thinks she’s alone. Today she has turned on one of her favorite scenes with Amira Adara and she’s ready to have some fun. Gradually peeling off her robe and then her bra and thong, Bella feels herself up as some hot foreplay. Then she settles down on the couch to diddle her greedy twat while she matches the pace Amira is setting on the screen.What Bella doesn’t know is that her boyfriend, Raul Costa, has come home early and caught her in the act. Bella is embarrassed by her abandon when she realizes Raul has been watching her. Then she sees the bulge in Raul’s pants and all her other thoughts go right out the window. She accepts Raul’s kiss and then gets him to take a seat on the couch so she can enjoy herself sucking him off in an enthusiastic BJ!Raul isn’t about to let Bella have all the fun. He gets her on her back and eases himself between her thighs. Although Bella is nice and wet to accommodate his dick inside her right away, Raul is all about foreplay. He flicks his tongue out to tease Bella’s clit and then settles in for a pussy feast that leaves Bella moaning and squirming with pent up need.By the time Raul gets to his feet and guides himself into Bella’s velvet glove, she’s drenched with her need. He slides home easily, going balls deep as Bella urges him on with her moans. The porn keeps playing in the background as Raul gives it to Bella with long, firm strokes.The couple spoons next so they can both enjoy watching Amira as they fuck. At first, Raul keeps the pace sweet and sexy. Eventually, though, he picks it up to really drive himself home. Pulling out, he finger bangs Bella until she explodes in a big O.Next, Raul sits on the couch while Bella climbs on top. Sinking back down onto Raul’s stiffie, Bella begins rocking her hips to go for a ride. She bounces away happily as her big boobs bounce in her primal rhythm. Then she turns around so that Raul can make out with her as she continues to ride him.Raul gets control back of their lovemaking when Bella rolls onto her hands and knees and invites him to give it to her from behind. Who wouldn’t take that doggy style invitation? Raul keeps Bella’s party going until she explodes. Then Bella gets on her hands and knees so she can stroke Raul off until he delivers a big cum shot right into her mouth and all over her smiling face. 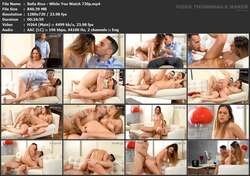