Kyle Mason’s dad just remarried Cecelia Taylor’s mom, and Kyle’s dad has warned him to never be alone with his new stepsister because she’s a total nympho. That doesn’t stop Kyle from admiring how hot his new redhead stepsis is. When he finds Cecelia under the sink in a miniskirt that makes it easy to see her panties, he can’t help but stare. Cecelia notices him and convinces him to help her unclog the sink. Although Kyle is reluctant to go against his dad’s instruction, he eventually agrees to help his sis out. Besides, from under the sink he gets one hell of an upskirt view.When Kyle asks Ceclia to run the sink to see if he got the clog out, Ceclia sprays his pants with water. Kyle is upset, but when he tries to get up he finds that he’s stuck under the sink. He asks Ceclia to help him out, but instead she insists on taking his pants off to dry them off. Then she starts rubbing Kyle’s dick to help him calm down as he frets about what he’s going to tell his dad if he comes home. Of course, that just gets Kyle nice and hard. Cecelia may have a boyfriend, but she isn’t about to say no to a chance to sample such a nice cock. Hiking her miniskirt up and tugging her thong aside, she impales herself on Kyle’s fuck stick to take him for a test drive.Eventually Kyle manages to get free from beneath the sink, but before he can do much more than that he finds his cock in Ceclia’s mouth as she gives him a deep throat BJ. Kyle is only human! When Ceclia leans over the kitchen island and offers herself to him, he takes that pussy. Fucking Cecelia as she stands there leaning forward is great, but it’s even hotter when Kyle gets Ceclia on the counter so he can squeeze her titties as he pounds that pussy. With Cecelia’s encouragement, Kyle keeps going until he shoves balls deep and blows his load in a big creampie that leaves Cecelia nice and sated. 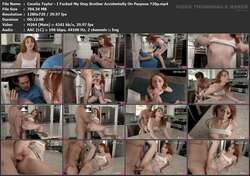