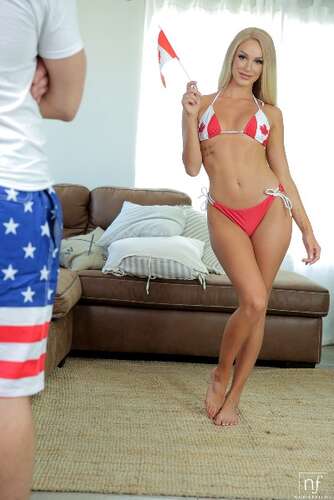 Zac Wild is all set to go for a fourth of July party, but he’s shocked when his Canadian girlfriend, Emma Hix, shows up in a different kind of patriotic outfit. Emma tries to justify her clothing choice, but Zac insists she go change into something more appropriate. That’s okay: Emma has a backup plan: An itty bitty Canadian bikini.When Emma struts out of the bedroom once again, Zac is rendered speechless. Emma doesn’t need Zac to speak. She tells him that she’d rather skip the party as she drops to her knees to stroke his hardon through his shorts. Zac doesn’t require any more convincing to let Emma lead him to the bedroom for a different kind of celebration.Kneeling over Zac as he lies prone on the bed, Emma gives him a heated kiss before sliding down his body. When she pops Zac’s stiffie out, she finds him nice and hard. That’s all the invitation Emma needs to open wide and start sucking Zac off. Her BJ is nice and eager, with plenty of attention paid to the balls, too.By the time Emma is done with Zac, she’s dripping wet for his touch. He turns the tables on her as they swap positions, slipping her bikini bottom aside so he can lap at her clit. Diving deeper, Zac gives Emma the pussy feast that her bare snatch demands. Once he has Emma writhing in eager horniness, Zac gets on his knees and slides his dick into her twat. Emma loves it, spreading her thighs nice and wide to encourage him deeper.Zac isn’t about to let Emma get off just once if they’re going to skip a party to fuck. He gets her on her hands and knees and then slams back inside. This time, he keeps pumping that pussy full of the D until Emma is moaning and writhing. Her belly gradually lowers until it hits the bed, slowly changing up the angle of penetration for both of their pleasure.Urging Emma up so that he can get on his back again, Zac helps his girlfriend slide down onto his fuck stick. Emma loves herself a stiffie ride, so it doesn’t take any convincing to get her bouncing up and down on the dick. When she turns around and leans back into Zac’s hands for added support, there’s no holding this horny coed back from riding as hard as she can.Emma keeps up her ride until she’s finally satisfied. Rolling off to the side, she cuddles close to Zac and takes his hardon in hand. She resumes her blowjob, then backs off a bit so she can stroke him off. When Zac is ready to blow, Emma opens wide and takes a mouthful of hot cum that drips down her chin as she gives Zac’s hardon a few final kisses. 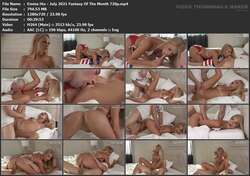