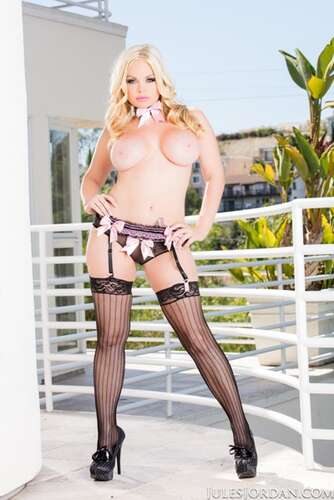 Jesse Jane has always proved “Blondes produce more cum.” and this scene starring the yellow-haired hellcat is no exception. Draped in black sheer lingerie and pink bows, Jesse does a quick shimmy and we notice her thick hips during her bobs. The devilish Jane creeps close to a large metal ornamental gate. Jules comes in from behind grabbing Jane’s knockers, giving them deep squeezes. Jesse unfurls Jordan’s cock from his pants, it pokes through the gate and Jane jacks it while playing with her shaved twat. Jules coaxes Jesse indoors for some cock sucking. Miss Jane has model good looks that adds a little extra to the visual. Voluptuous Jane is mounted in missionary spreading her legs as her black high-heels dangle during the drill fest. “I like to watch your dick go in and out of me” Jesse says. Jordan closes her legs and folds them over her head while Jane wraps her arms around them. This produces a fifties-like pin up view but with a XXX-rated twist. No leaving it to the beaver here. After some cowgirl and reverse-cowgirl Jules has Jesse prop herself over the arm of a long couch. Jordan takes advantage of the now doggy prone Jane. Pumping her ass until it ripples. Jules dips down and Miss Jane says “Are you gonna eat that fucking ass?” Jordan gives his answer then pumps her plump cheeks some more. Disheveled Jesse drops to her knees and Jules paints her model mug with jillions of jizz, producing a pearly white smile from Jesse… 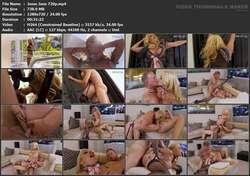