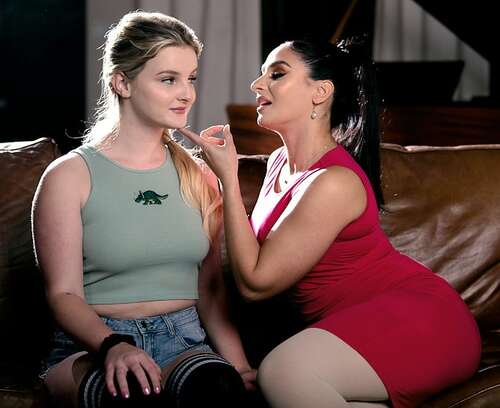 Eliza Eves is a babysitter. She knocks on the door of a house, thinking it’s the home of her newest client, Mrs. Donovan. However, she actually has the wrong address, and Sheena Ryder answers the door. Eliza believes that Sheena is Mrs. Donovan, and introduces herself as the new sitter. Seeing how hot Eliza is, Sheena decides to play along, claiming that she is indeed Mrs. Donovan. She invites Eliza inside.Inside the house, Sheena tries to maintain the ruse that she is Mrs. Donovan and that she actually has a little bundle of joy for Eliza to look after… but in reality, Sheena is NOT a parent! As Sheena and Eliza chat, Sheena has to continuously make things up about her non-existent little darling. When Eliza asks to see the little one’s favorite toy, Sheena hastily leaves the room for a moment to go get it. Sheena – obviously scrambling – returns a moment later with a whisk, claiming that THIS is the favorite toy.Sheena then decides to make her move before Eliza asks further questions, and starts flirting with her. At first, Eliza is confused by this turn of events, but Sheena manages to convince her that it’ll be fun. They start making out, and then progress to touching each other’s breasts, and eating each other’s pussies… By the time Eliza figures out that she’s at the wrong address, she’s had such a great time that she doesn’t mind at all! 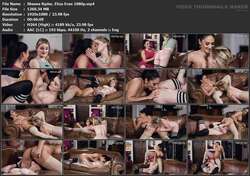